A special FBI rescue team flown in from Quantico, VA worked with police and regional SWAT teams on Saturday to rescue the four hostages taken captive at a Colleyville, Texas synagogue. Three hostages escaped as federal agents breached the building in the late evening about five hours after one hostage had been released by a terror suspect just after 5 p.m.

The announcement came from Texas Gov. Gregg Abbott who had been closely monitoring the crisis as it unfolded at Beth Israel, a Dallas-area Jewish synagogue where the suspect reportedly made demands to release a female Islamist terrorist. The incident unfolded dramatically into a nail-biting standoff that captivated the nation for several hours as police and FBI agents scrambled to avert tragedy.

At 10:33 p.m. the Texas governor tweeted, “Prayers answered. All hostages are out alive and safe,” marking the end of a gripping drama for the lone-star state.

While the story was still developing, the terror suspect released one male hostage unharmed, and news reports indicated the suspect had a bag of bombs in his possession. Several hours after the first hostage was released, news outlets reported a loud bang and gunshots, and that the other three hostages were finally free. Details about those final moments when agents stormed the building are still developing, although one of the hostages was reportedly a rabbi.

From the early stages of the incident, authorities were convinced the threat was specific to one issue and would not endanger anyone outside the synagogue. Earlier in the day, Colleyville Police Dept. Sgt. Dara Nelson told journalists that special negotiators for the FBI “have contact with the person in the building,” and that there was “no threat to the general public.”

One hostage was released at 5 p.m., but a breach of the synagogue by an FBI hostage rescue team (HRT) enabled the other three hostages to escape shortly after 10 p.m. U.S. Rep. Beth Van Duyne subsequently sent a text message to a journalist for the Fort Worth Star-Telegram to inform the newspaper the hostage taker had died, and law enforcement officials soon confirmed that fact in a late-night press conference.

Matt DeSarno, the FBI’s special agent in charge in Dallas told journalists in a press conference the federal law enforcement agency brought in 60-70 personnel rescue team from their headquarters in from Quantico, VA to resolve the situation.

“As Chief Miller said, the FBI hostage rescue team, I consider one of the crown jewels of our organization,” Special Agent DeSarno said. “Their mission is to conduct deliberate hostage rescues when necessary. In this case, we had a necessity for that. And they were successful, I’m very proud of that. I’m also extremely proud of the team of negotiators, FBI agents, local police officers who worked all day long and engaged with the subject and likely saved the lives of the subjects just through their engagement. It’s very likely the situation would have ended very badly early on in the day if we’d not had professional consistent negotiation with the subject.”

DeSarno added the law enforcement community remains convinced the incident was isolated and does not represent a larger threat to the Jewish community or other Texan residents, but they are planning to continue investigating.

“We’ve been working closely with secure community networks in the Jewish Federation, and I want to continue to do that… throughout the country. We do believe with from our engagement with this subject that he was singularly focused on one issue and it was not specifically related to the Jewish community, but we’re continuing to work to find motive and we will continue to work on that path.”

“In terms of resolution of the incident, the hostage-taker is deceased. We will conduct an independent investigation. My evidence response team will be here to process the scene, and a team from Washington will be here to conduct an independent investigation of the shooting incident, and that’s the way we handle those things, through our normal standard operating procedure.”

The FBI hostage rescue team (HRT) was originally formed after the 1972 Munich Olympics when 11 Israeli athletes were taken hostage and killed. The HRT, which is part of the FBI’s Critical Incident Response Group (CIRG) has been dispatched more than 850 times since its inception has been described by the FBI as the “last line of defense when it comes to high-risk missions involving terrorists, hostage-takers, and violent criminals.”

According to the FBI, the HRT has “undertaken traditional law enforcement roles in response to large natural disasters and dignitary protection missions, and has deployed to Iraq, Afghanistan, and other countries to protect FBI personnel and to conduct sensitive site exploitations and intelligence gathering activities.”

President Joe Biden praised the work of law enforcement for their rescue efforts and success.

“There is more we will learn in the days ahead about the motivations of the hostage-taker. But let me be clear to anyone who intends to spread hate – we will stand against anti-Semitism and against the rise of extremism in this country,” Biden said in a written statement. “That is who we are, and tonight, the men and women of law enforcement made us all proud.” 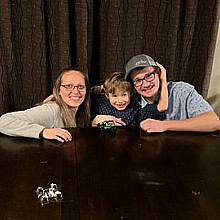