The suspect immediately retreats yelling "He shot my arm off!”

An 80-year-old convenience store owner shot an armed man who was trying to rob his store in Southern California over the weekend, officials said.

The surveillance footage for the store shows several people arriving in a black BMW SUV at the Norco Market & Liquor on the 800 block of Sixth Street around 2:45 a.m. on Sunday. They all had their faces covered.

One of the robbers enters the store with an AR-15 rifle ready to shoot. However, moments later, the store owner grabs his shotgun and fires a single shot.

The suspect immediately retreats yelling “He shot my arm off!”

Four suspects were found at a nearby hospital as the one who was shot was receiving treatment from the gunshot wound, reported the Riverside County Sheriff’s Department.

The rest of the suspects were found outside inside of the vehicle, which police later determined to be stolen.

Additionally, investigators said that they found several stolen guns inside the vehicle.

Police arrested Justin Johnson, 22, Jamar Williams, 27, and Davon Broadus, 24, on suspicion of robbery and conspiracy. They are being held on a $500,000 bail, according to the Sheriff’s Department.

The identity of the suspect who was shot has not yet been released. Sheriff officials said he “remains hospitalized in critical, but stable condition.” Upon his release, he will be placed in a Riverside County jail.

“In this case, a lawfully armed member of our community prevented a violent crime and ensured their own safety, while being confronted with multiple armed suspects,” according to a statement from the Sheriff’s Department.

Store employees said the owner saw the armed men get out of the vehicle through the store monitors and prepared himself.

"The sheriff warned us that this had been going on in the area recently and to just be on your toes, you know, so he was on his toes. Thank God," employee Marnie Tapia said.

"He just prepared himself. He's always prepared as far as weapons go," Tapia said about the owner.

The store owner, 80, is recovering from a heart attack after going through the shocking incident.

The incident remains under investigation. 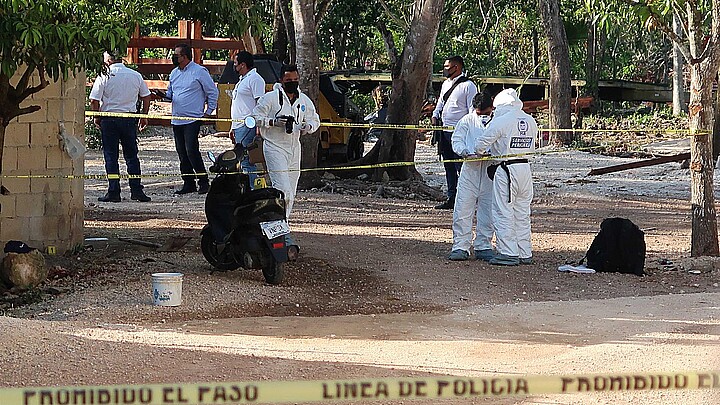