Bishop of Maltapagua Rolando Alvarez, one of the biggest critics of Nicaraguan President Daniel Ortega’s government, was arrested early on Friday after a two-week standoff with police at his residence.

Alvarez had been holed up in his residence for two weeks after police surrounded his house and blocked him from leaving. At least nine men, including priests, were forced to ration their food during this period since the police did not allow anything to be delivered to the residence.

According to the police investigation, Alvarez is “organizing violent groups and inciting them to carry out acts of hate against the population … with the aim of destabilizing the Nicaraguan state.”

Just after 3 a.m., police raided Alvarez’s residence, arresting him and the eight other individuals.

“#SOS #Urgent. At this time the National Police have entered the Episcopal rectory of our Matagalpa diocese,” Alvarez tweeted as the raid began.

The police released a statement after the arrest saying Alvarez had been transferred to the Nicaraguan capital of Managua, where he was placed under house arrest.

Church sources believe Alvarez might be forced into exile, as other church members have done so in the past. Most recently, former bishop of Managua Silvio Jose Baez Ortega left the Central American country in 2019 after receiving multiple death threats.

The move comes as Nicaragua’s relationship with the Catholic church continues to deteriorate, despite it being the main religion in the country. Last week, Ortega’s government banned the catholic procession for Our Lady of Fatima scheduled for last Saturday citing “internal security reasons"

So far this year, three priests have been arrested, 12 Catholic radio stations have been cut off, and three Catholic TV channels have been forced off the air.

The regime has closed more than 1,000 NGOs and civic groups, including Mother Theresa’s Charity. The Ortega regime claims the groups receive funding from abroad to conspire to remove him from office.

“With a heart full of pain and indignation, I condemn the nighttime kidnapping of Monsignor Alvarez,” Baez said in a tweet on Friday about the police raid. 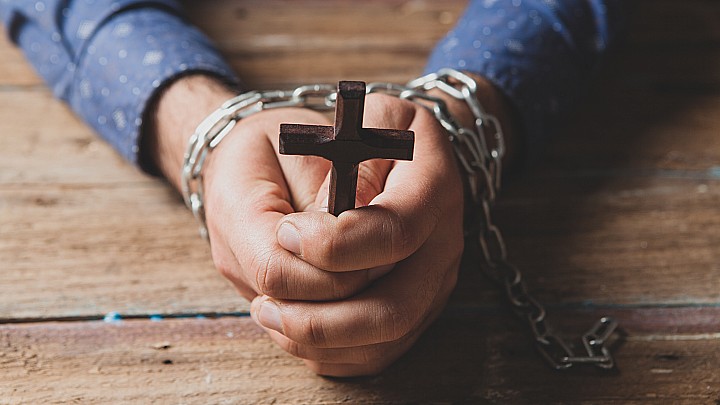 Nicaragua sentences 4 Catholic priests to a decade behind bars